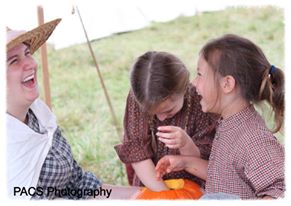 I’m getting ready to leave for the past – 1864 to be exact as I’m a Civil War Re-enactor. I have been since I was 16 and a friend came into class, handed me a permission slip and told me to have my mother sign it and that on Saturday I was going with her to Gettysburg to get something to wear.  I had found a fascination in the American Civil War when I was 13 and going out to do this peaked my interest in a way the same way that dressing up for the Renaissance Faire or Wild West Re-enacting (which I also occasionally do) did. History fascinated me and I wanted to know every little detail from all sides of the story and every single person. I didn’t ask any questions. I was just excited. That’s how I came to join the Chesapeake Signal Detachment with the Provisional Army of the Confederate States (PACS).

Fast forward twelve years and it’s the morning of what is usually my favorite event of the re-enacting season. Cedar Creek. It’s a beautiful fall weekend. I haven’t been out on the field all season due to work. And yet, here I am nervous about getting ready to leave. I would make the excuse that I’m nervous because, for the first time in almost five years, my fiance isn’t coming with me, but I know that’s not true. I could say I’m nervous because last weekend  I was on vacation and next weekend I am in a wedding and I’m afraid of over exhausting myself before Thanksgiving. But, I know that none of those things are the truth. I know that deep down I’m nervous because of the political climate of my country.

But, I know that none of those things are the truth. I know that deep down I’m nervous because of the political climate of my country. I’m worried that while the people I re-enact with know not to ask me about my political views because they may be vastly different from their own and I will tell them about it, the people who come to see re-enactments or just hear that I participate will make assumptions and label me because I wear a grey uniform. They’ll assume that I believe “the South will rise again” when in reality I see wearing my grey uniform as more of a history lesson. Someone has to play the bad guy, right? I’m worried for my safety. I received an email the other day saying that the threatening letter received by the event’s committee had been investigated by the FBI and local police, and while it proved to be nothing, they were going to increase security checkpoints at the event. And while that makes me feel better, it makes me sad and makes me wonder if this is going to become the new norm.

This is the only re-enactment I’ll be able to get out to this year and I want to go…I think. But, I’m wondering if this is the last time for me. I’m getting busier with work,  I’ve taken up some new hobbies that require less time, and as I was packing the car last night, I was asking myself why I wanted to do this…if I even still wanted to do this. (Let’s be honest, I haven’t been out in so long, I forgot how to pack the car…) Maybe it’s best if, after this weekend, I just let this hobby go quietly into the night. Let it be apart of my past and who I was. I can’t deny that it helped shape me in a lot of ways. It made my attention to detail when I worked in theater remarkable so that when I worked in close audience spaces things look authentic. (The number of historical productions I worked on is huge…and I still get calls to do them.) It solidified my political views when I had none. (In case there was any doubt, I’m very liberal.) It gave me some unlikely friendships and proved to me that there was at least one child I could tolerate. (So many people mistook me for her mother.) It made me unique and always gave me something interesting to talk about at parties. (Everyone always wants to know how the guns are loaded…even though I’m a signalist with a book…and not a gun at all.) It helped with my film degree on more than one occasion. (Shooting re-enactment scenes are always easier when you have access to the appropriate costuming.) I found that being a spy and working in cryptography was something I could potentially be interested in doing. (That is what I do on the field…I code and decode messages sent via a flag. That’s it. Or I’m a woman in a  hoop skirt who has this knowledge and can signal with my hat or lantern.) But, I think it may be time to retire my hoop skirt and Sergeant’s stripes once and for all. We’ll see how I feel after the weekend, but I know an ending when I see one…and this sure feels like it might be one.

UPDATE 10/15: They found a pipe bomb while I was out there and they had to evacuate the camp. It’s really scary to have that happen. Dave and I left early to come home since we weren’t feeling safe and most things had been canceled after that point.