The Best Advice I Ever Took: Pursue What You Love, or How Benedict Cumberbatch Saved My Master’s Degree

I’m sure you’re wondering about the title of this post. I will explain I promise. But, it’s a long story that culminates in  me holding this beautiful piece of paper that I received in the mail not that long ago. But, that’s how the story ends. I figured now was as good a time as any to make this post. While I technically walked in May, my diploma didn’t come until August…which means I get to celebrate it now according to my university…and I’ve been holding on to this post for a while. Bit nervous to post it. Ok. Now. Let’s start at the beginning.

Three years ago when I returned from a year studying abroad, I thought I had my life figured out. I had fallen in love with a research project on how film affects the perception of culture and I swore to myself that I wanted to be a professor. So, I did what any twenty-one year old who thinks they have everything figured out does, I applied to a grad program that would allow me to continue this research. I applied for the International Media program at American University.

I was excited. I was more prepared for graduation. I had a plan.

What I didn’t account for was how burnt out I would be after my senior year of college. And I was rather burnt. By the time graduation came in May of 2011, I was still kidding myself into thinking that grad school was exactly what I wanted to do. It wasn’t until August of 2011, when I sat down in orientation that I realized that grad school wasn’t exactly what I wanted.

After talking with the department director (and having a bit of breakdown, if I’m being honest), I decided that I would continue to pursue my degree and if something came along that better suited where I was in life, I would put the program on hold and pursue it. That didn’t turn out to be the case. Partially due to the fact that I was involved with several theater shows, partially due to my investment in my classes and honestly, I only applied a few places, so I wasn’t exactly surprised that I didn’t hear back.

My disappointment at realizing that I wasn’t where I wanted to be was quickly lessened, however, as I sat through one of my classes that fall. As I listened to Professor Craig Hayden, an awesome professor I should add, talk about participatory culture as a study in international communication, I thought back to my summer spent with Esther and Chelsea.

Quick recap on the summer of 2011. Two of my best friends from college, Esther and Chelsea, and I  had fallen in love with Sherlock, or rather Chelsea had introduced it to Esther and me. It was love at first sight when I saw Sherlock beating a corpse with a riding crop. I couldn’t get enough of the show (…it was actually this show that made me realize that I wanted to be a filmmaker…and essentially brought about this identity crisis in the first place, but I won’t hold that against it), so I did what any obsessed fan did. I went looking for other fans who were just as obsessed and I found them…and the mountains of fanfiction, fanart, fanvids, etc. It was glorious.

Flashback to sitting in Professor Hayden’s class. I’m unsure what happened exactly, but during that lecture something clicked.

Someone told me once that if you were to going to get anywhere in life, it was not by making yourself miserable…which is what I was doing when I started grad school. The moment I realized that I was here to study and investigate something I truly loved was the moment grad school changed.

I know what you’re thinking. ‘Becky, this has nothing to do with Benedict Cumberbatch.  You haven’t mentioned him once.’ You would only be partially right. How exactly did Benedict Cumberbatch save my Master’s degree? By doing what he loves…acting. I just happen to love his acting. 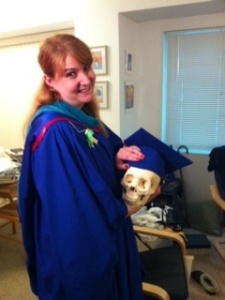 My obsession with Sherlock and my love for Benedict as an actor influenced a great deal of my work. I found his work as an actor seeping into all of the academic work that I pursued. I wrote reviews of films that he was for the international media blog, I wrote articles about Sherlock fans, I studied British public diplomacy and how the British have taken to using celebrities and pop culture to create a positive image for themselves (see: The Great Campaign) and I capped it all off by talking to Sherlock fans again this time about intellectual property rights and fanworks. My social life became my academic life. I traveled to conventions (Katsucon and 221BCon to be exact) and talked with other academics about fan culture while dressed as Sherlock Holmes.

It seems a little silly to credit an actor as the reason that I finished my Master’s degree, but the truth is I don’t know that I would have finished it if I wasn’t studying something that I love. That made all of the difference in the world. It made having to spend weekends when my other friends were out having fun and I was writing a paper more bearable. It made

I’ve often been told to study what I love and I love Benedict Cumberbatch, so it all worked out in my favor.

One response to “The Best Advice I Ever Took: Pursue What You Love, or How Benedict Cumberbatch Saved My Master’s Degree”